By Alex Blackburn-Smith, currently doing her honours with the Research Centre for Applied Alpine Ecology at La Trobe University

The Caltha introloba Herbland Community is one of the rarest and most specialised vegetation alliances in alpine Australia, yet we know very little about it. Indeed, for 40 years, no-one has been quite sure how to classify them. Are they associated with Sphgnum bogs? Snowpatches? Are they wetlands? The rarity of Caltha Herblands has been recognised enough to list them as a threatened communities under the Flora and Fauna Guarantee Act (1998), and they have further protection under the Environment Protection and Biodiversity Conservation Act (1999) through their association with Sphagnum Bogs (listed as endangered under EPBC) and Snowpatches (critically endangered under EPBC). Yet, while Caltha Herblands are a form of wetland, and while they do commonly occur in areas of late snow lie, and while they are typically surrounded by sphagnum or bog vegetation, Caltha Herblands are a separate vegetation unit. A base study of where they are and what’s in them is critical for their management.

So, what are they?

Caltha Herblands are semi-aquatic, sparsely vegetated, short alpine herb fields that occur on a rocky/gravelly substratum called a ‘pavement’. They rely on a constant water source, either a ground water source, such as a spring or ground seepage, or a water course such as a creek. 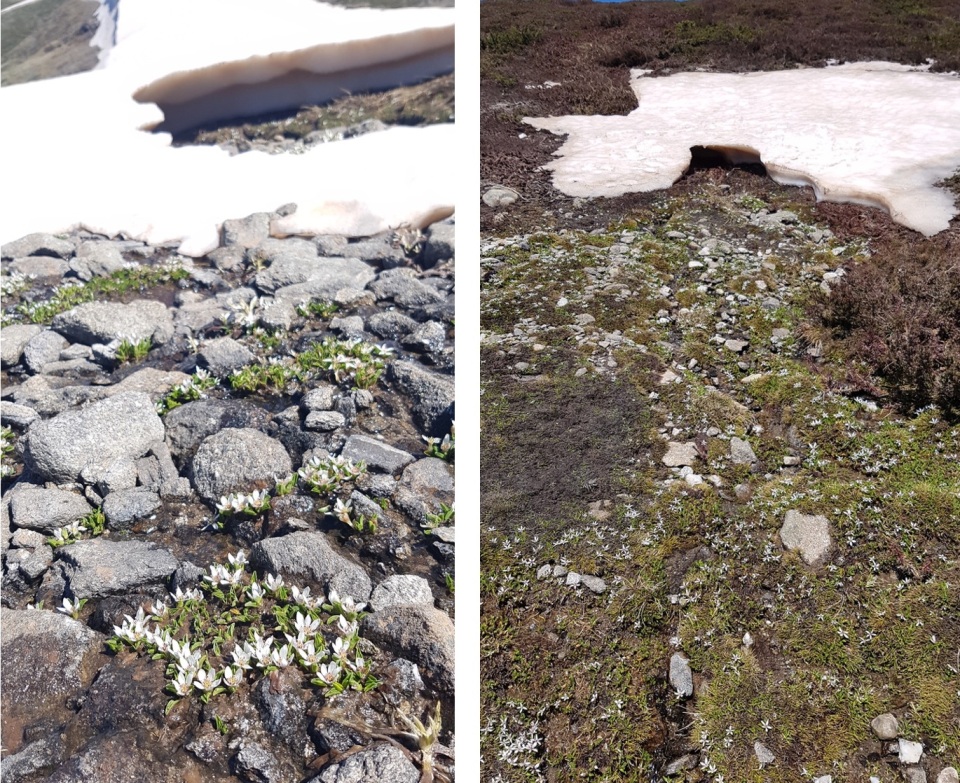 Whilst restricted to the Bogong High Plains in Victoria, Caltha Herblands are found in a range of different landscape setting – from steep slopes under snowpatch vegetation, to relatively flat slopes beside creeks. At least 98 patches of Caltha Herbland community have been identified across the Bogong High Plains, from the northern to southern end, both above and below the tree line.

Some of the rarest alpine herbs and forbs in Australia! Key species include Psychrophila introloba (formally Caltha introloba – the species from which the community gets its name), Oreobolus pumilio, Drosera arcturi, Juncus antarticus and Celmisia sericophylla are the most common of the rare species across Caltha Herblands. Some sites contain species such as Oreomyrrhis pulvinifica, Plantago glacialis and Parantennaria uniceps which are all endangered species in Victoria and restricted to Caltha Herblands.

Not only do these communities contain a whole host of listed and vulnerable species, the total area that this community takes up within Victoria is thought to be less than 2 hectares. Further, we believe that the substrata on which this community lies is a periglacial relic or fossil periglacial feature. The origin of these pavements is hypothesised to be from freeze/thaw erosion and weathering action during a past cold climate period. If this hypothesis proves correct (further study is needed to attempt to determine this), then these communities have heritage significance as well as geological and geomorphological value.

Cushion of (A) Juncus antarticus, (B) Plantago glacialis and (C) Oreomyrrhis pulvinifica growing on a pavement.

Currently, this study has finished the field work phase. Abiotic, including slope, aspect, size, degree of rockiness, soil depth and water cover, and floristic data has been collected from 19 sites across the Bogong High Plains. Eight of these sites have long-term data which will enable us to look at any broad vegetation change that has occurred over the past 40 years.